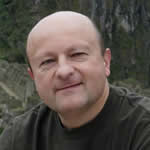 Prior to launching his business, Laszlo was tapped as a Strategic Consultant for America Online in 1995. His clients included the Greenhouse of AOL Studios, the AOL Finance Channel and a wide range of interactive brands like the Motley Fool, iVillage and NetNoir. Laszlo placed the first advertising program on AOL’s largest content site and contributed to the launch of over 50 digital startups.

Laszlo received his MBA from Harvard Business School in 1995. He graduated from the Film Academy of Budapest in 1989, as a film and television director, including a study period at the BBC in London. Laszlo received his Bachelor of Arts degree in languages literature from the ELTE University of Budapest, Hungary. He provides services for the Virginia Economic Development Partnership’s (www.exportvirginia.com) export promotional programs.

Laszlo serves on multiple boards: a leader in machine Intelligence, Leros corporation (www.Leros.com), mobile commerce company ShopDash (www.shopdash.com), technology incubator Traction Tribe (www.traction-tribe.com), and on the board of advisors for global business intelligence firm Five+ (www.fiveplus.co). He is founding partner of Crimson Growth Partners (www.crimsongrowthpartners.com) and serves on the board of MobilizedMeetings (www.mobilizedmeetigns.com). Laszlo is a member of the Harvard Club of New York, San Francisco and Washington DC and an Alumni Advisor and Fundraiser for the Harvard Business School.

Horvath has been appointed to the District Export Council of the United States Department of Commerce in 2008 and the Industry Trade Advisory Council in 2009 by the US Secretary of Commerce. Laszlo is a sought after speaker at US and International conferences on online marketing, advertising, branding and Internet strategy, including Fortune Magazine, MEED Middle Eastern Business Intelligence and he also serves as a member of the Global Advisory Board of the CEO Clubs International (www.ceoclubs.org) and the American Hungarian Executive Circle (www.americanhungarian.org) .